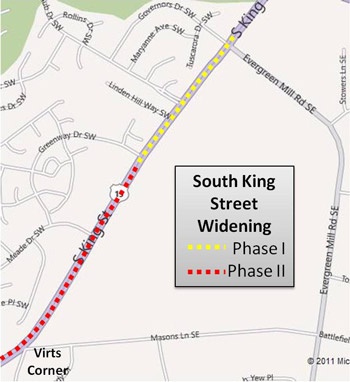 Project Description: South King Street (Route 15) is a principal arterial route and major link in the regional highway network serving Northern Virginia, the metro area, and the Mid-Atlantic region and serves as the primary southern gateway to the Town. Widening this section to four lanes is a regional project, currently included in Washington Council of Government’s Long Range Plan and VDOT’s Statewide Plan.

The project widens Route 15 from two to four lanes for approximately 1.5 miles between the southern corporate limits at Virts Corner to north of the Evergreen Mill Road intersection. The improvements include an urban curb and gutter roadway section with a raised landscape median, stormwater facilities, a multiuse trail along the west side and enhanced landscaping. The landscaping is being coordinated with the Journey Through Hallowed Ground Partnership Living Legacy Project which commemorates the 150th anniversary of the Civil War with a goal of planting a tree along the 180 mile corridor from Charlottesville to Gettysburg for each of the 620,000 soldiers who died.

The project is being constructed in phases, as follows:

Phase II (from south of Masons Lane at the southern corporate limits to Greenway Drive) – This 0.9 mile section will complete the 4-lane divided roadway south of the Leesburg Bypass. The completion of this portion of the multiuse trail on the west side of the road will connect between the trail constructed in Phase I and a trail that was recently constructed by VDOT south of the Leesburg corporate limits. This project will incorporate the recently completed improvements at Virts Corner that signalized that intersection and realigned the streets. The improvements will also tie into the proposed Battlefield Parkway intersection at Meade Drive.

As of February 21, 2020 - Construction was completed in December 2017 and all lanes are open to traffic.  Streetlights have been installed and landscaping will be installed this calendar year.