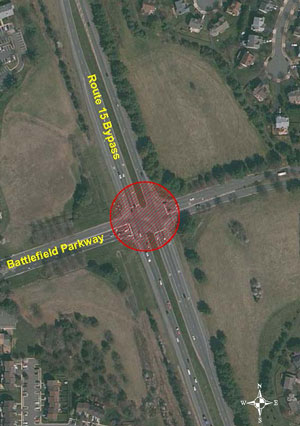 Project Description:  This project consists of development of an Interchange Justification Report (IJR) for a new grade separated interchange at the current signalized intersection between the Route 15 Leesburg Bypass and Battlefield Parkway.

Route 15 is part of the National Highway System that serves as a major commuter route for residents from northern Loudoun County, Maryland and Pennsylvania travelling to employment centers in eastern Loudoun County, Fairfax County, and points further east. The intersection with Battlefield Parkway is one of three signalized intersections on the bypass. The other two traffic signals will be removed with the future construction of an interchange at Edwards Ferry Road and Fort Evans Road.

The Battlefield Parkway intersection experiences routine congestion, especially during the afternoon peak periods when northbound traffic on Route 15 backs up into the area. In addition to the vehicular traffic issues, the Bypass acts as a barrier to discourage pedestrians and bicycles from traveling between the residential and recreational areas east and west of Route 15. The initial step of developing an interchange is to prepare an IJR. This study will evaluate the need for the interchange, compare alternative designs, analyze environmental impacts, and establish a project budget.

As of September 6, 2019 - Northern Virginia Transportation Authority (NVTA) awarded $2 million in funding for preliminary design and an Interchange Justification Report at their June 18, 2018 meeting.  Work will begin this fiscal year.