Show/Hide
We are in the process of reorganizing the Town of Leesburg website. If you reached a "Page Not Found . . ." result by following a search engine link, please try your search again, using the search box below. We apologize for any inconvenience, but hope you will find our reorganized website easier to use. 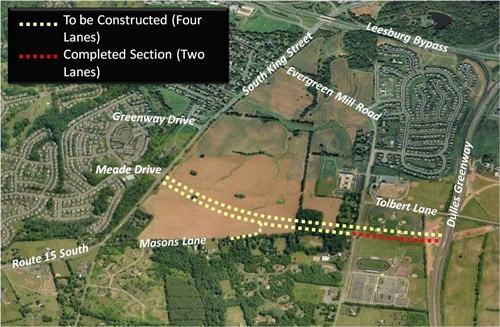 Project Description: The project includes construction of a 0.7-mile segment of Battlefield Parkway on new alignment between South King Street (Route 15) and Evergreen Mill Road (Route 621); and widening of the existing Battlefield Parkway to four lanes between Evergreen Mill Road and the Dulles Greenway. The new roadway is a four-lane divided arterial roadway with a parallel sidewalk and shared-use trail. The project reduced congestion and improve traffic flow to Route 15. This segment completes the continuous Parkway from North King Street to South King Street around the east side of Town.

The roadway was planned to be constructed as a two lane roadway initially, then widened to four lanes when funding became available. However, the Virginia Department of Transportation provided $11 million in funding for the project, which allowed the Town to construct the entire four-lane roadway under a single contract.

Project Status: This project was completed in the spring of 2018.  On April 16, 2018, a ribbon cutting ceremony was held and the new lanes of Battlefield Parkway were permanently opened to traffic.