Project Description:  The purpose of this project was to implement improvements within the Old and Historic District to help it regain its vitality. The planned improvements enhance accessibility for pedestrians, improve safety for motorized vehicles, and enrich the aesthetics downtown. Improvements included new and widened sidewalks, traffic calming, and landscaping / hardscape improvements.

The project was constructed in phases, including: 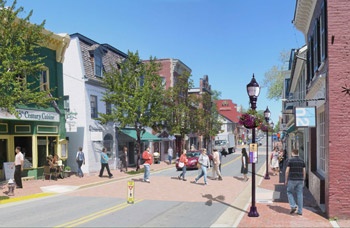 The final phase of the Downtown Improvements project included replacement of sidewalk and curb and gutter, reconstructing the roadway pavement, and adding crosswalks on North King Street between Market Street and Cornwall Street. The work was coordinated with the Downtown Streetlight project to provide decorative lighting on this section of downtown streets.

Project Status:  This project was completed in 2018.