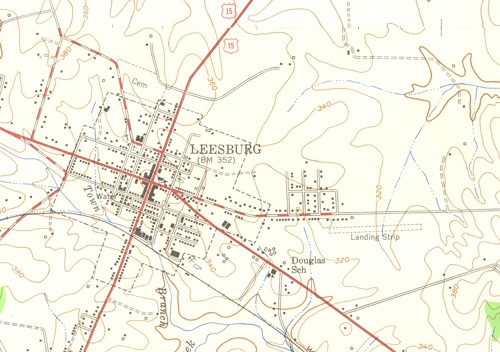 Leesburg’s municipal airport got its start in 1918 when a World War I plane landed in a grassy field on Wallace George's farm. This impromptu airstrip, known as “George’s Field,” became popular with barnstormers in the 1920s. For a fee, pilots would take people for short rides over the Potomac River. Located near the present-day Manor Apartments on Edwards Ferry Road (shown as "Landing Strip" on the 1952 USGS Quadrangle Map detail at right), George's Field became a privately-run airfield known as the Leesburg Airpark following World War II.

In 1950, radio and TV personality Arthur Godfrey purchased the Leesburg Airpark and donated the property to the Town of Leesburg under the condition that the property continue to be used as a public airport for 20 years. Godfrey flew in and out of the Leesburg Airport for his weekly commute to New York City and popularized it on his national radio show as the "Old Cow Pasture."

As the Town grew and development began to surround the airport, the need for a larger airport site became evident to Town leaders. In September 1961, the Town Council created an Airport Committee to investigate the possibility of applying for a grant from the newly created Federal Aviation Agency. The Leesburg Airport Committee commissioned a study that recommended a larger site than the existing airport and identified the location of the present Leesburg Executive Airport.

In August 1962, the Town Council created the Airport Commission and appointed Stanley Caulkins, George Hammerly, and Dr. Albert B. White as the commission's founding members. Under the guidance of the new Airport Commission, the Town applied for and received a grant from the Federal Aviation Agency for the purchase of land and construction of a new, modern airport. Mr. Godfrey released the Town from the provision to use the existing Leesburg Airport as a public airport, allowing the Town to sell the property and use the proceeds of the sale as grant matching funds.

In June 1963, Leesburg was awarded the grant and construction on the new airport began. The new airport was named Godfrey Field in honor of Arthur Godfrey. Construction costs totaled almost $478,000, with half of the funds supplied by federal and state grants. When it was dedicated on October 10, 1964, Godfrey Field featured a 3,500 foot runway, taxiways, parking aprons, two hangars and an administration building with passenger lounge. The airfield had runway lighting and a rotating beacon that served as a guide light from dusk to dawn.

The 1960s saw an explosion of growth driven by the completion of Dulles International Airport in 1962. Businesses attracted by the airport streamed into eastern Loudoun County. Traffic at Godfrey Field also increased as companies established their headquarters near Leesburg. Corporate aircraft began to look for homes away from Dulles, putting pressure on the airport to start expanding in the 1980s.

In 1993, the Town of Leesburg took over direct control of the airport and began an aggressive growth campaign. The airport was renamed Leesburg Executive Airport at Godfrey Field in 2000, and is now home to nearly 300 private and corporate aircraft supporting some of the largest corporations in the world.