Show/Hide
We are in the process of reorganizing the Town of Leesburg website. If you reached a "Page Not Found . . ." result by following a search engine link, please try your search again, using the search box below. We apologize for any inconvenience, but hope you will find our reorganized website easier to use.

The department was recognized for improvements to Greenway Park Playground, which were implemented in summer 2018. 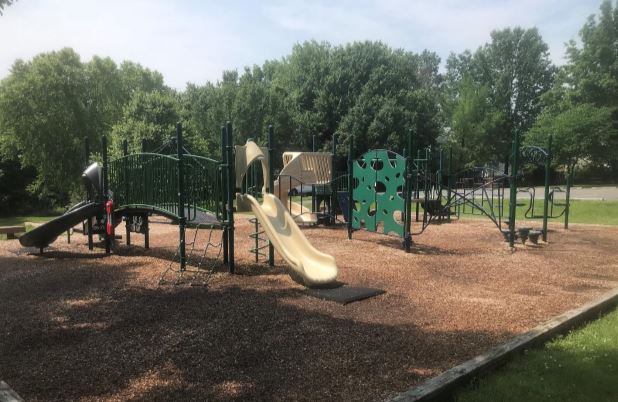 Leesburg, VA (September 18, 2019) – Leesburg’s Department of Parks and Recreation was the recipient of the “Best New Renovation/Addition” award during the 64th Annual Conference of the Virginia Recreation and Park Society, held in Tysons Corner, last week.

Over 500 delegates from around the state gathered as an opportunity for recreation and park professionals to discuss areas of common interest. Highlighting each year’s conference is a formal presentation of awards, which honors individuals, departments, and organizations throughout Virginia who have demonstrated excellence in any of several areas during the previous year.

Out of 115 applications that were considered for awards in 14 different categories, Leesburg Parks and Recreation won for recent improvements to the Greenway Park Playground.

Originally built in 1997, staff recognized the original playground was outdated and had been receiving community comments for upgrades. As a result, staff requested and was awarded Capital Improvement funding in the FY18 budget for the Greenway Playground redevelopment.

New equipment was purchased in early June 2018 and arrived on schedule for a mid-July install. The removal and installation of the play structure was completed in ten days, one day prior to the deadline date of August 1, 2018. The Town celebrated the newly renovated playground with a ribbon cutting ceremony on August 3, 2018.

Designed by Playground Specialists, Inc., the playground features two play areas, one for ages 2 to 4 and the other for ages 5 to 12. New components to the playground include climbers, climbing walls and nets from Playground Specialists’ Adventure Series, a swivel seat, ground-level musical and play panels, and an imagination play area. The most unique addition is the cargo net climber, the first of its kind in Leesburg and clearly the favorite feature among the children at the ribbon cutting.

The Town of Leesburg strives to provide a healthy and active environment for its citizens. The Greenway Park playground not only benefits children’s physical health, but also plays an important role in their psychosocial development.

Greenway Park is one of seventeen parks in the Town of Leesburg’s 368 plus acre park system and features a four acre park featuring a playground, basketball court, picnic tables, benches, and a nature trail.

The mission of the Virginia Recreation and Park Society is to unite all professionals, students, and interested lay persons engaged in the field of recreation, parks, and other leisure services in the Commonwealth of Virginia.  For more information on the Society contact the state office at 804-730-9447 or visit the website at www.vrps.com.