Vice Mayor Martinez is the longest-serving member of the current council. 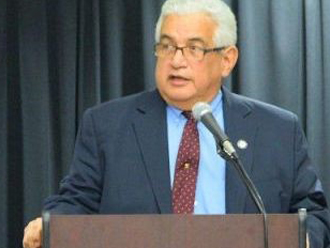 Leesburg, VA (January 8, 2019) – At their first meeting of the new year last night, the Leesburg Town Council elected Fernando “Marty” Martinez as Vice Mayor. He will serve as Vice Mayor until December 31, 2020.

Vice Mayor Martinez was first elected to the Leesburg Town Council in May 2002, making him the longest-serving member currently on the Town Council. He previously served as Vice Mayor from July 2004 to June 2006.

Martinez has lived in Leesburg with his wife Doris and their children since 1993. Originally from California, Martinez holds a bachelor of science in Economics and Computer Science from Portland State University and proudly served his country in the United States Air Force for over seven years. He recently retired after a long career as a Systems Engineer, supporting a variety of government agencies including the Federal Aviation Administration. Martinez is active in the community, coaching in a number of youth and adult sports leagues. He currently serves on the Loudoun County Transit Advisory Board.