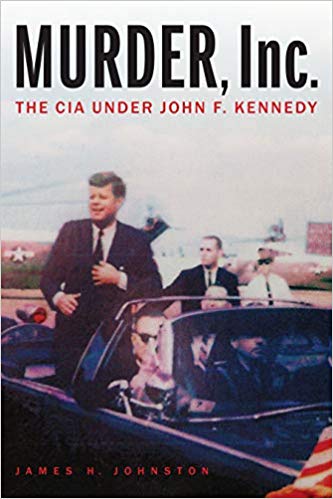 Late in life, former President Lyndon B. Johnson told a reporter he didn’t believe the Warren Commission’s finding that Lee Harvey Oswald acted alone in killing President John F. Kennedy. Johnson thought Cuban President Fidel Castro was behind it. After all, Johnson said, Kennedy was running “a damned Murder, Inc. in the Caribbean,” giving Castro reason to retaliate. Murder, Inc. tells the story of the CIA’s assassination operations under Kennedy up to his own assassination and beyond. James H. Johnston was a lawyer for the Senate Intelligence Committee in 1975, which investigated and first reported on the Castro assassination plots and their relation to Kennedy’s murder. Johnston examines how the CIA steered the Warren Commission and later investigations away from connecting its own assassination operations to Kennedy’s murder. He also looks at the effect this strategy had on the Warren Commission’s conclusions that assassin Lee Harvey Oswald acted alone and that there was no foreign conspiracy. Based on in-depth research into the “secret files” declassified by the JFK Records Act and now stored in the National Archives and Records Administration, Murder, Inc. is the first book to narrate in detail the CIA’s plots against Castro and to delve into the question of why retaliation by Castro against Kennedy was not investigated.

James H. Johnston is a lawyer, journalist, and lecturer in Washington, DC. His writings have appeared in the New York Times, Washington Post, White House History, Howard Law Journal, Legal Times of Washington, American Lawyer Magazine, Corporate Counsel, and the Maryland Historical Society Magazine. His publications include From Slave Ship to Harvard: Yarrow Mamout and the History of an African American Family and The recollections of Margaret Cabell Brown Loughborough.

Programs sponsored by Thomas Balch Library are held in the Lower Level Meeting Room and are free unless otherwise noted. Books will be available for purchase the day of the event.  Cash or Check only.   Due to limited seating, we recommend registering in advance by calling 703-737-7195 or on-line at https://www.leesburgva.gov/government/departments/thomas-balch-library/library-events/event-registration.  For updated news on events, visit our website at:  www.leesburgva.gov/ThomasBalchLibrary or find us on Facebook.